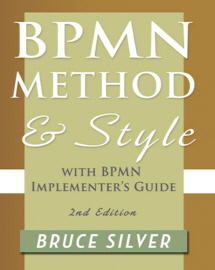 The second edition of Bruce Silver’s book BPMN Method and Style is now available.  The first edition was published in June 2009, based on the BPMN 2.0 “beta” specification.  The new edition is based on the final specification of August 2010, officially adopted by OMG in January 2011.  The graphical notation did not change between beta and the final, but there were a number of significant changes in the metamodel, XML schema, and “rules” of the spec.  These are all reflected in the new edition.