Process Modeler supports the extension of “Identical Shapes” for a selected list of elements, like Lane, Pool and Group . This way, several Visio shapes may represent the same element within the business process. These Visio shapes thus have identical names and share the same attributes (including user defined attributes).

In the case of a Task, Sub-Process, Data Object or Data Store, referencing does not define elements as identical but only points from a visual element to a hidden (base) element.

To go to the referenced element just select the task, sub-process or identical element and use the right mouse button context menu and choose Goto Called Element. We assume the Task is referencing another element. 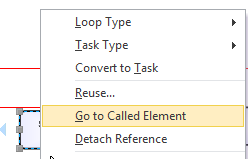 To remove a reference use the context menu Detach Reference. This action removes the referencing relation between the elements. 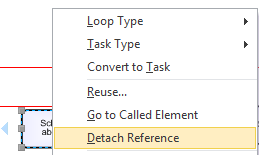